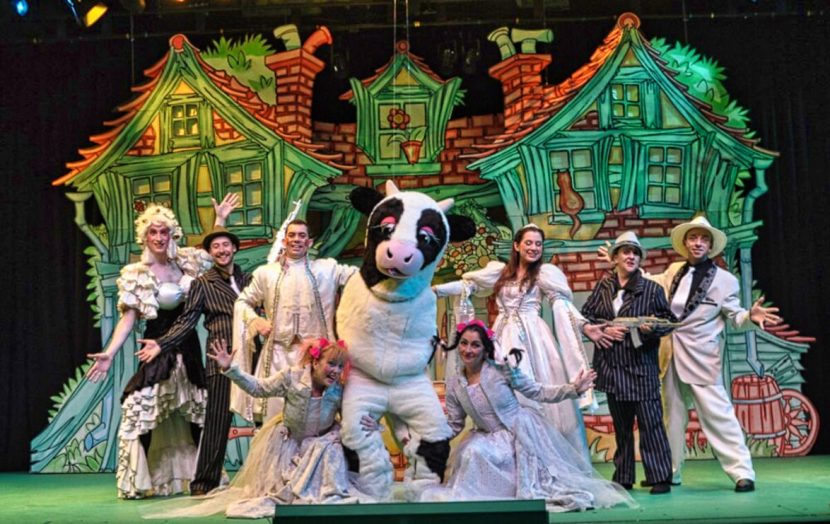 That time of year again, when usually I would be up to my armpits in dame wigs and glitter.

I have been to ask the magic mirror on the wall and she tells me there will be a panto after all!

And I know what you’re thinking! There’s no way you’ll be able to keep up these panto puns for the whole post…

Oh yes I will!

With the help of the Good Fairy, I have scoped the country to find some awesome panto offerings throughout the UK, which will help you go from feeling like the back end of the pantomime horse to the star of the show in no time.

And hopefully, in the spirit of panto and with a sprinkle of pixie dust, I’ll help inspire your arts business to create some fun panto content of your own!

A star-studded Comic Relief, Christmas offering from the BBC with bonus illustrations from the legendary Quentin Blake and cameos from James Blunt, David Tennent, Sam Smith and Sir Mo Farah. Celebs adorn their own makeshift costumes and source their own random props to tell the story of Cinderella in true covid style, including a surprise Hollywood Mega-Star stepping up to play the panto horse!

Essentially, this is a rehearsed reading over zoom including lots of classic gags from the year like Button’s internet connection breaking up just at the moment he tries to declare his undying love for Cinderella, an interruption at the door for a Morrison’s delivery or people entering the scene on mute. It works because the cast was brought together on the same call and can play off each other, raising the banter to another level.

From the outtakes at the end, it is clear that the participants had a delightful time filming which you feel as an audience member. It goes to show you can have fun, make great content and raise money, all at the same time.

My First Panto: Goldilocks and the Three Bears by The Garage 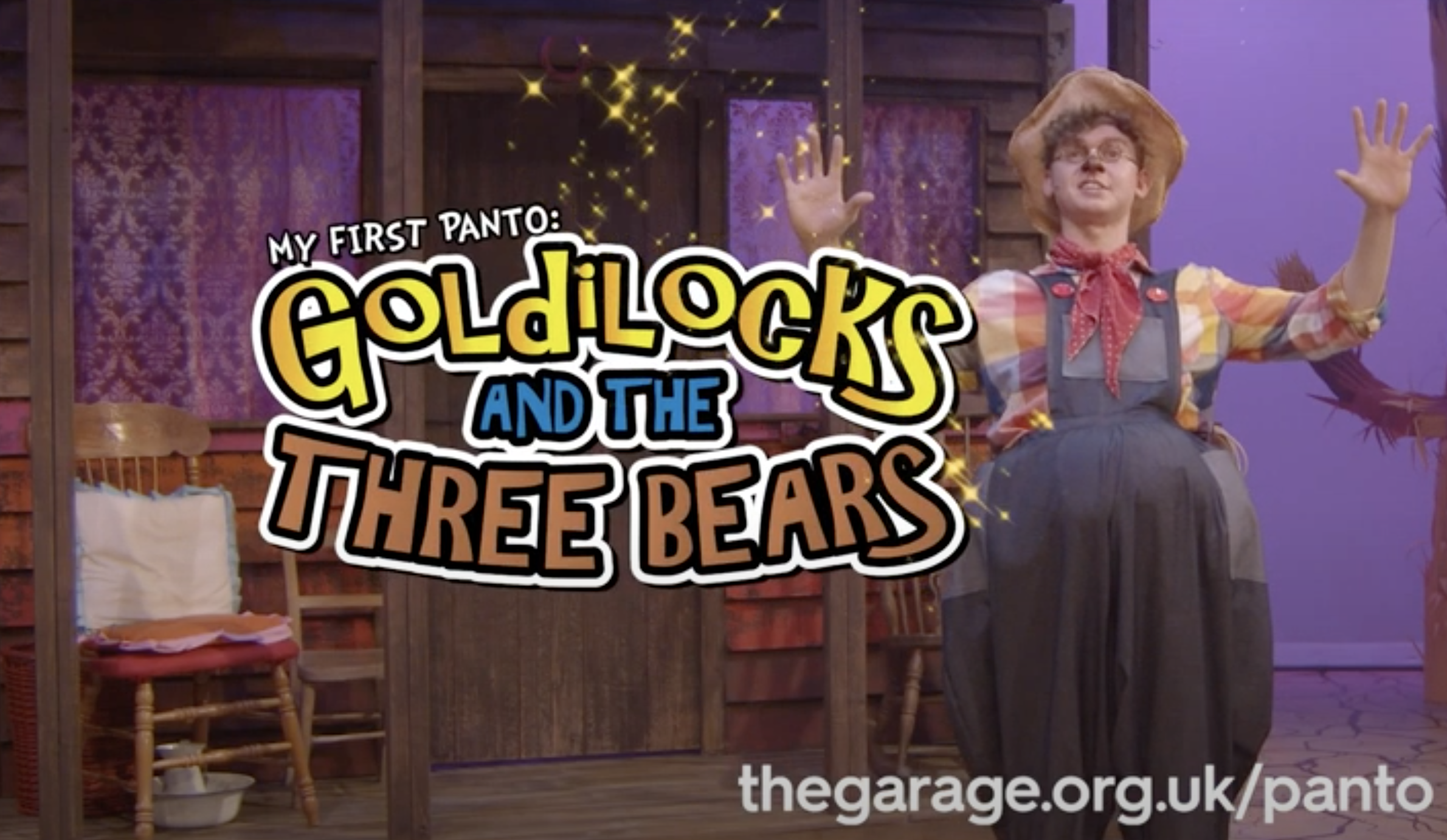 You may think that restricting your work to a particular audience will limit your number of viewers, but by specifically devising and customising your work to fit a particular buyer persona your work becomes more appealing and stands out from your competitors. Another thing this show does brilliantly is utilise a small cast, which means that it is easier to create content whilst abiding by government coronavirus guidelines.

Check out The Garage’s My First Panto HERE! 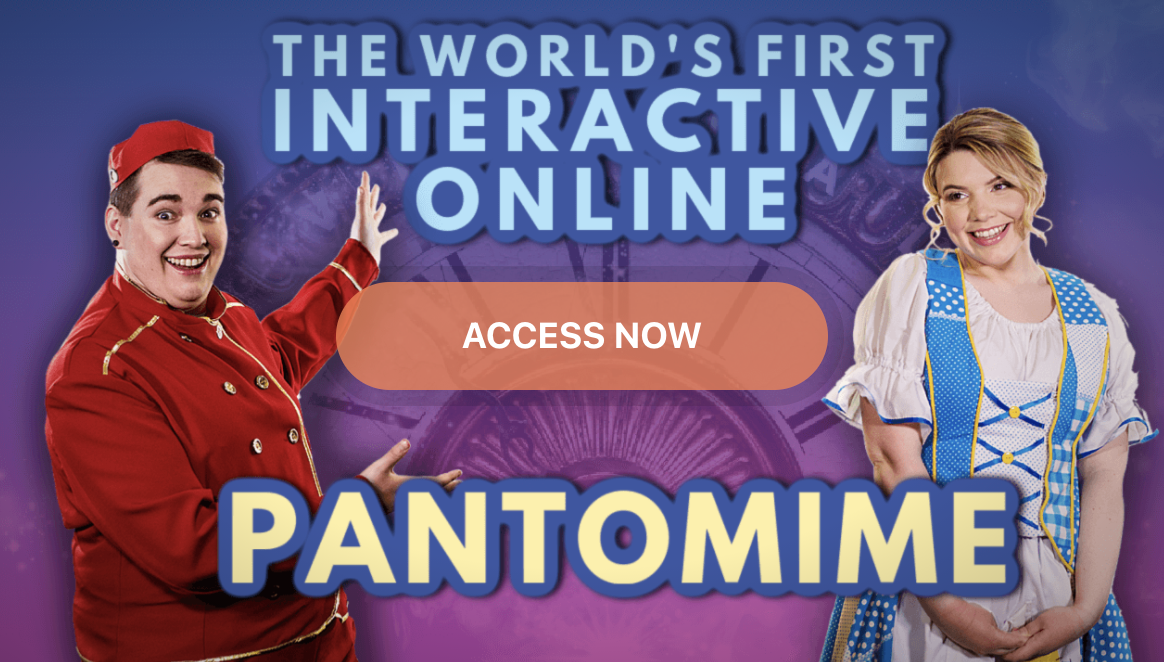 Available until 31st January, PantoLive has created a fully interactive online panto, cleverly produced using CGI and green screen bringing the panto experience directly to your living room with the special touch of Chris Johnson who makes for an awesome and engaging Buttons.

A great little addition to this show is the interactive audience buttons including all of your classic panto responses:

You don’t need to be a tech wizard to encourage this type of interaction in your content. If you choose to stream your work on Facebook live, for example, you can ask your audience to get involved by pressing the like, love, care, wow, haha, sad and angry buttons! Don’t be afraid to get creative with technology which already exists!

The Scunner That Stole Christmas by The Gaiety 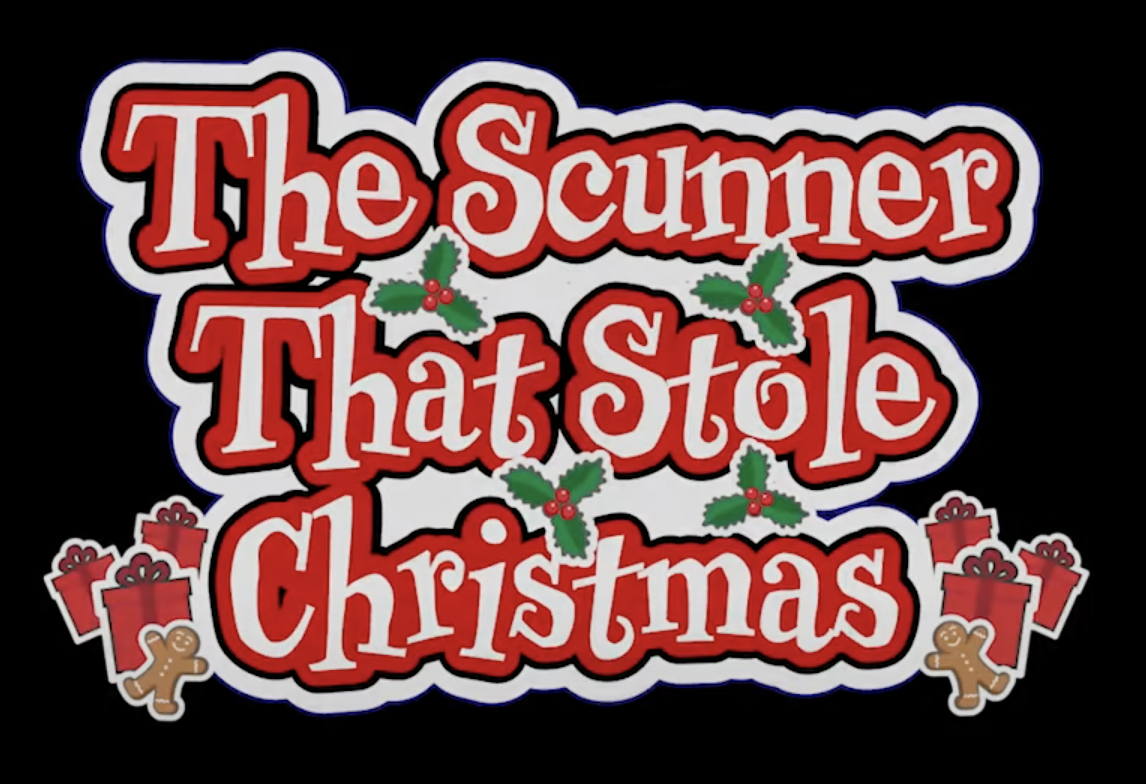 An episodic panto designed especially for the local community, filled with classic lines, characters, shout outs and even a chase sequence! The main narrator, aptly named Fairy Handwash leads the action where cast roam around the county of Ayrshire looking for the lost panto ingredients of Joy, Adventure and Togetherness.

At the end of each episode, they even give ways for the audience to send in their contributions to help save Christmas. This is like a masterclass in how to create User Generated Content (UGC) for your Arts Business. By asking the kids watching the video to contribute, not only does it engage them in the conversation, it makes them feel a part of your business, hence boosting your brand visibility and authority. The great added bonus is that they also created videos for your social media, which as we all know, can be a time consuming and arduous task. Sending in your best panto jokes or teaching your finale choreography are just two great ways you might involve your audience!

Check out The Gaiety’s The Scunner that Stole Christmas HERE!

A cancelled panto season has left the baddies of the fairy tale world at a loss of what to do with their lives! Join them on a pre-recorded zoom call as they discuss their options for future bad deeds and figure out if they can get back to their usual terrible plots whilst the pandemic rages on, complete with song and dance and for the bargain rental fee, from Vimeo, of £7.

The genius Unique Selling Point (USP) of this panto is the stand out storyline twist. From Disney alone with their successful franchise of ‘The Descendants’ where we see the offspring of the Disney baddies coming of age, or their best-selling board game ‘Villainous’, which allows players to pick their favourite Disney Baddie and win by completing their awful schemes, we know that this format can be successful. This is exactly what Conquest Theatre has done with their online panto offering!

Try to think of unique angles in your content which will appeal to viewers in a way that your competitors don’t.

Jack and the Beanstalk by Ulster Theatre Company 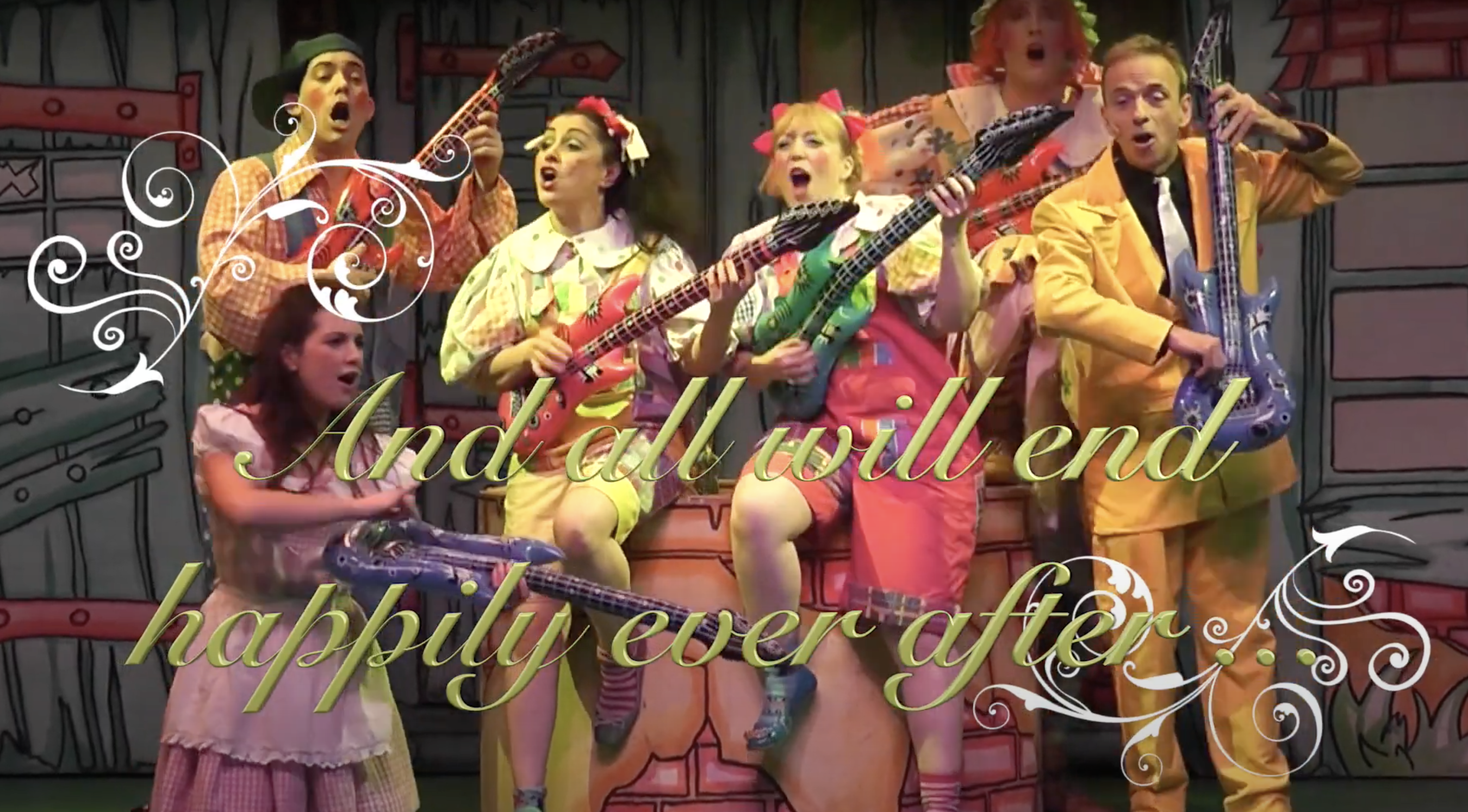 The most traditional of online panto offerings comes from the Ulster Theatre Company. It is a pre-recorded show (like the live streams offered from the National Theatre) of Jack and the Beanstalk with all the features you would usually expect from a Christmas show, and a pantomime cow who can perform Riverdance.

Whilst we can’t get to the theatre you shouldn’t be frightened to pull material out of your archives. It isn’t just for the major companies like The Shows Must Go On and Shakespeare’s Globe. You can either present this content for free with a suggested donation or set it up to have a rental fee, like the Ulster Theatre Company has, charging £9.99 per household, much less than you would usually spend taking your family to the theatre and no less of the quality! A really great panto! It’s available until the 31st January 2021.

Check Out the Ulster Theatre Company performance of Jack and the Beanstalk HERE!

This is one of the most brilliant theatre endeavours I have come across this pandemic. Since Autumn, Alliance Theatre has been compiling performances from a cast of 350 participants from all across the globe to contribute to this wacky and brilliant retelling of Cinderella. Characters morph into other versions, with multiple community members playing their part, bringing to life everyone from Cinderella herself to the Pumpkin who longs to be her coach! They have also developed a completely different short retelling of Cinderella so there is no excuse to not get your panto on!

This is User Generated Content (UGC) used in the best possible way. What I really love about so-called amateur productions is the clear passion everyone contributing has in the success of the project. Basically, everyone is having a lovely time and that makes you have a lovely time watching it! Why not have a think about different ways you can use your audience to not only create great content, but have the best time doing it.

Check out both Cinderellas from Alliance Theatre HERE!

Goldilocks and the 3 Bearz by Basel English Panto Group 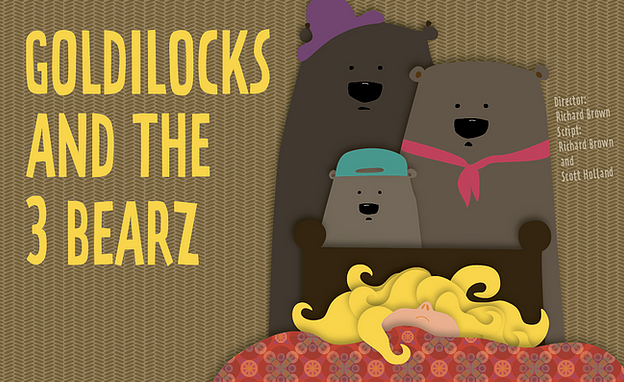 This is an awesome contribution from a small company across Europe in Switzerland who are introducing the very British Tradition of Pantomime to the local community of Basel with the opportunity for locals to take part themselves. And let me tell you they have definitely nailed the panto concept! The specially arranged dance routines and covers, including the disco classic ‘Love Shack’, really helped me to get my panto fix this year!

This can also act as a stimulus for your arts business. Are there any traditional art forms or shows that are performed elsewhere in the world that could be reimagined for the British stage? Get your research on and really push the boat it here! I assure you there will be groups all over Facebook with enthusiasts like yourselves just longing for a platform to experiment, from Japanese Noh Theatre, Indian Harikatha or the traditional Commedia Dell’Arte of Italy find your niche and have fun with it.

And I’m afraid that’s it for now, (oh no it isn’t, oh yes it is) but we would love to hear about any online shows you’re putting on this panto season! Just hit us up in the comments below and we will do our best to share them on Social Media!